NEW YORK, November 19, 2021 – For the first time in its 40-year history, Hetrick-Martin Institute (HMI) broke away from its annual Emery Awards traditional gala to produce an interactive event bringing current and former HMI staff, youth and alumni together with ballroom community members for a show-stopping experience. Pier Sixty at Chelsea Piers in New York City was converted into a fashion runway on Thursday night where everyone including guests participated in the LGBTQ+ youth organization’s largest annual fundraiser. 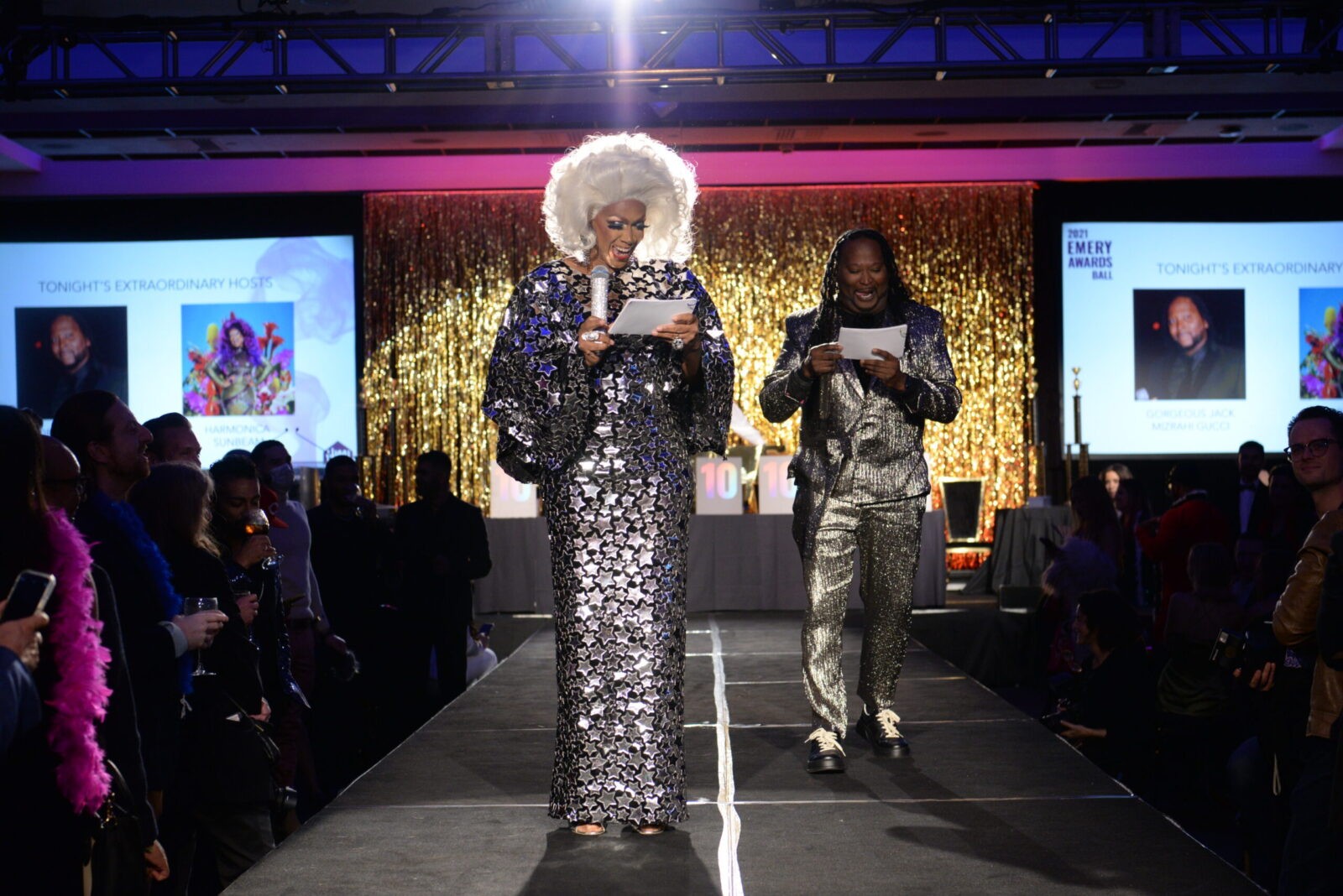 The event opened up with a high-energy performance by The Iconic House of Miyake Mugler, Season Two winners of HBO Max’s ‘Legendary’, before international icon, writer and producer, Gorgeous Jack Mizrahi Gucci and drag performer and comedy queen, Harmonica Sunbeam took the stage as hosts of the two-hour event.

Attending the event for the first time in his role as HMI Chief Executive Officer, Joe Pressley welcomed guests with special mention to his predecessor, Thomas Krever, who was also in attendance. Before making his remarks, Mr. Pressley reminded everyone that this year’s Emery Ball was being held during Trans Awareness Week, which raises visibility for transgender individuals—the same trans youth and community members who are or have been part of the HMI family over the years. 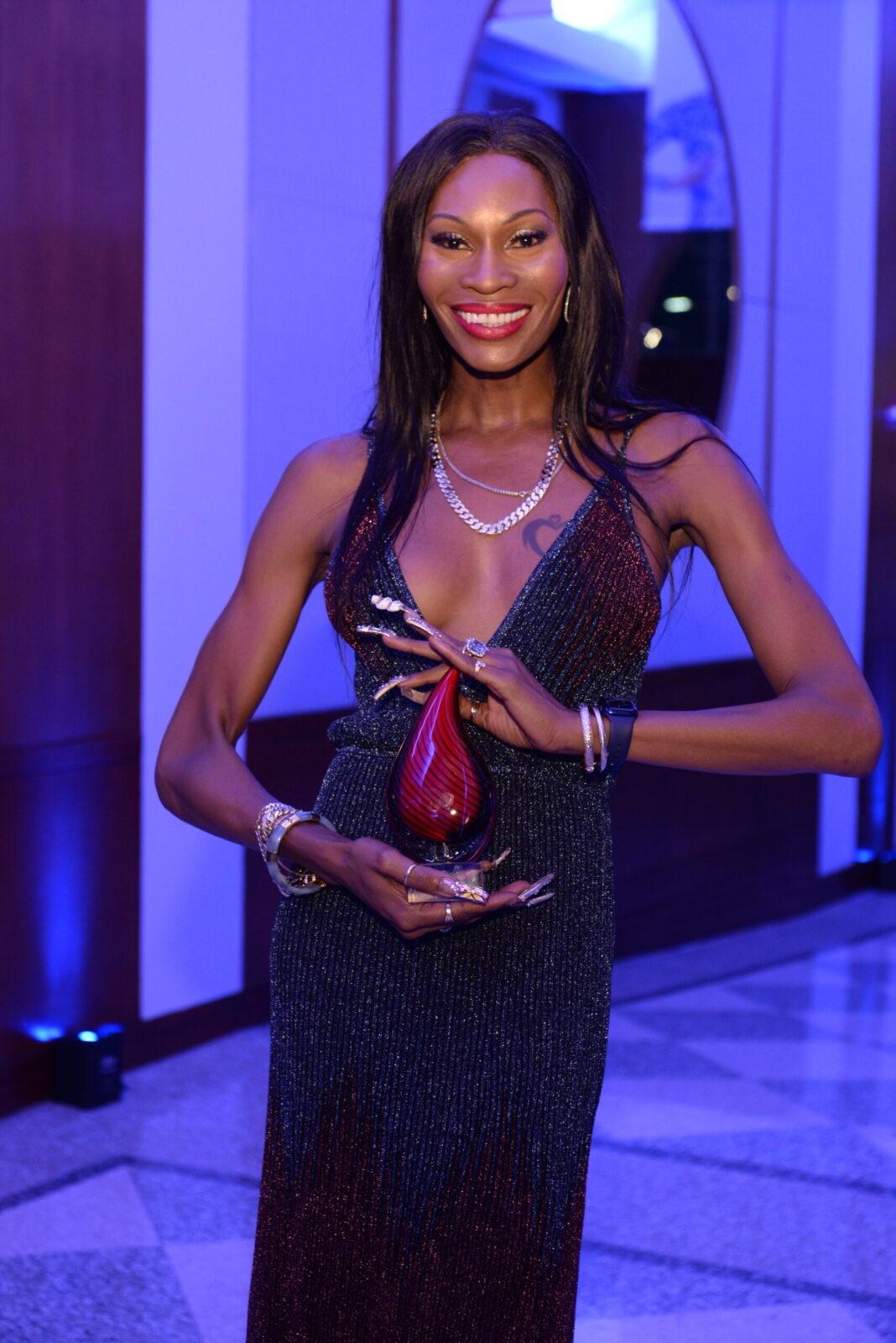 Event architect and former HMI youth member, Jonovia Chase worked with Chief Development Officer, Amy Harclerode and her team to produce a non-stop show of entertainment which included a Ballroom Showcase where four houses— The Imperial Dynasty House of Hua Mulan, The Iconic House of Juicy Couture, The Royal House of Old Navy, and The Luxurious Fashion House of Louboutin—battled it out in a voguing competition across four categories throughout the evening. TV personality, author and runway coach, Miss J Alexander, served as a special guest judge for the evening. 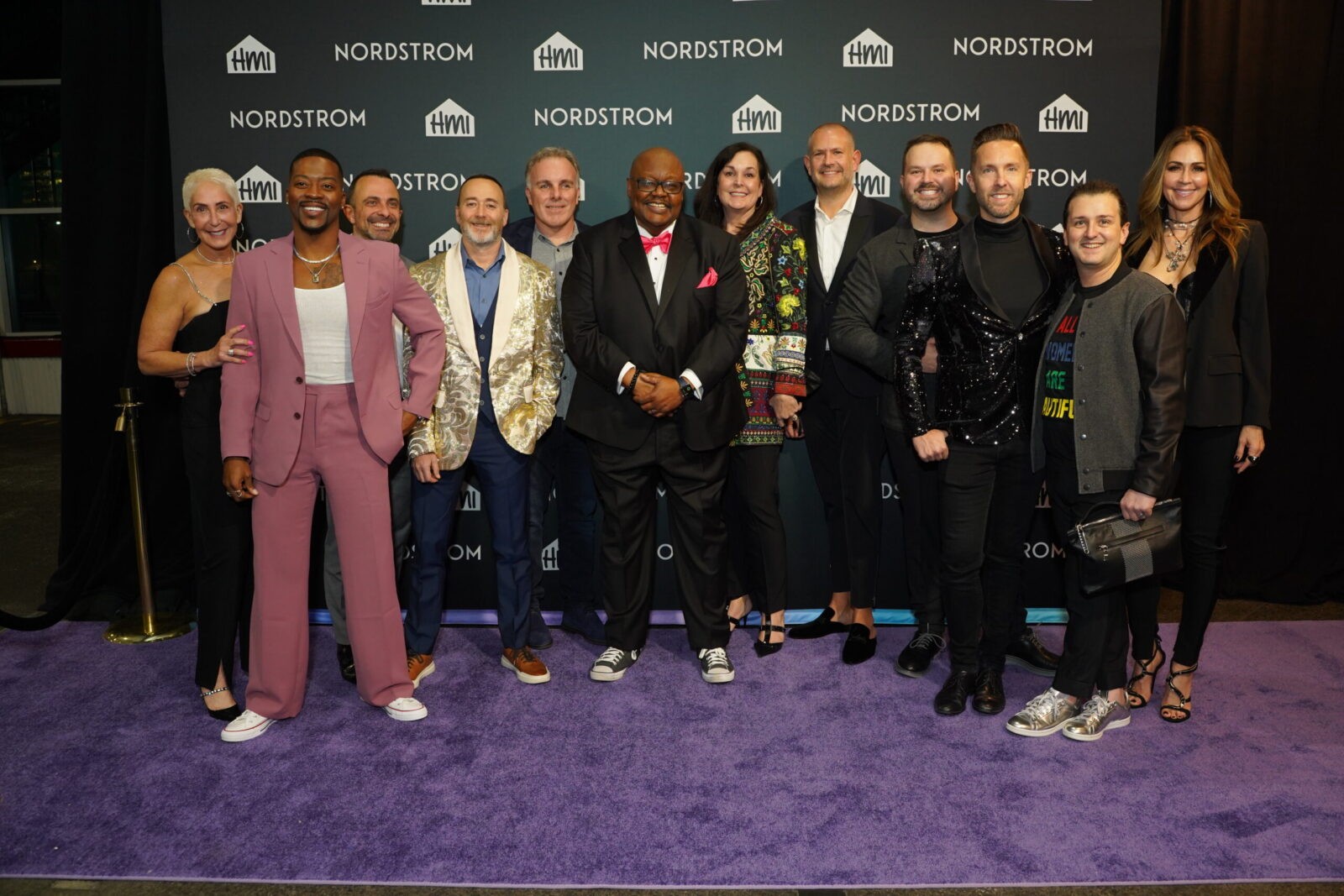 HMI’s Board of Directors split into teams to support the four houses by selling tickets for their respective houses. Attendees were prompted to select a house to support upon their ticket purchase. Upon entering the venue, they were given colored boas representing the different houses they would cheer on during the Ballroom Showcase making for a true interactive experience. The House of Louboutin, grossing the highest dollar ticket sales, was awarded a cash prize to continue their important work. The other three houses were also awarded smaller cash prizes to take home as well.

Legends in their own right, Lina Bradford and Byrell the Great, were spinning the music to enhance the setting as guests DJs for the VIP and main events, respectively. Throughout the night, guests were able to visit a unique photo exhibit— A Portrait of Kiki—by celebrity and fashion photographer Roger Moenks and curated by Jonovia Chase and HMI Board Member Shelly Brown. The beautifully presented photos on display in a gallery-esque section of the venue were available for sale at the event and can still be purchased online at the event website. The exhibit was presented by The Mackay Dixon Team at Douglas Elliman and Citizens Bank, and featured extraordinary portraits of some of the most important ballroom icons that have shaped the community. An interactive and immersive virtual experience of this exhibition was produced by Yahoo.

The event ended on a high note for HMI, which came very close to meeting its fundraising goal, and was lauded by guests, honorees, entertainers, and sponsors for producing one of the most entertaining and inclusive experiences to date. View photos by Andrew Werner. 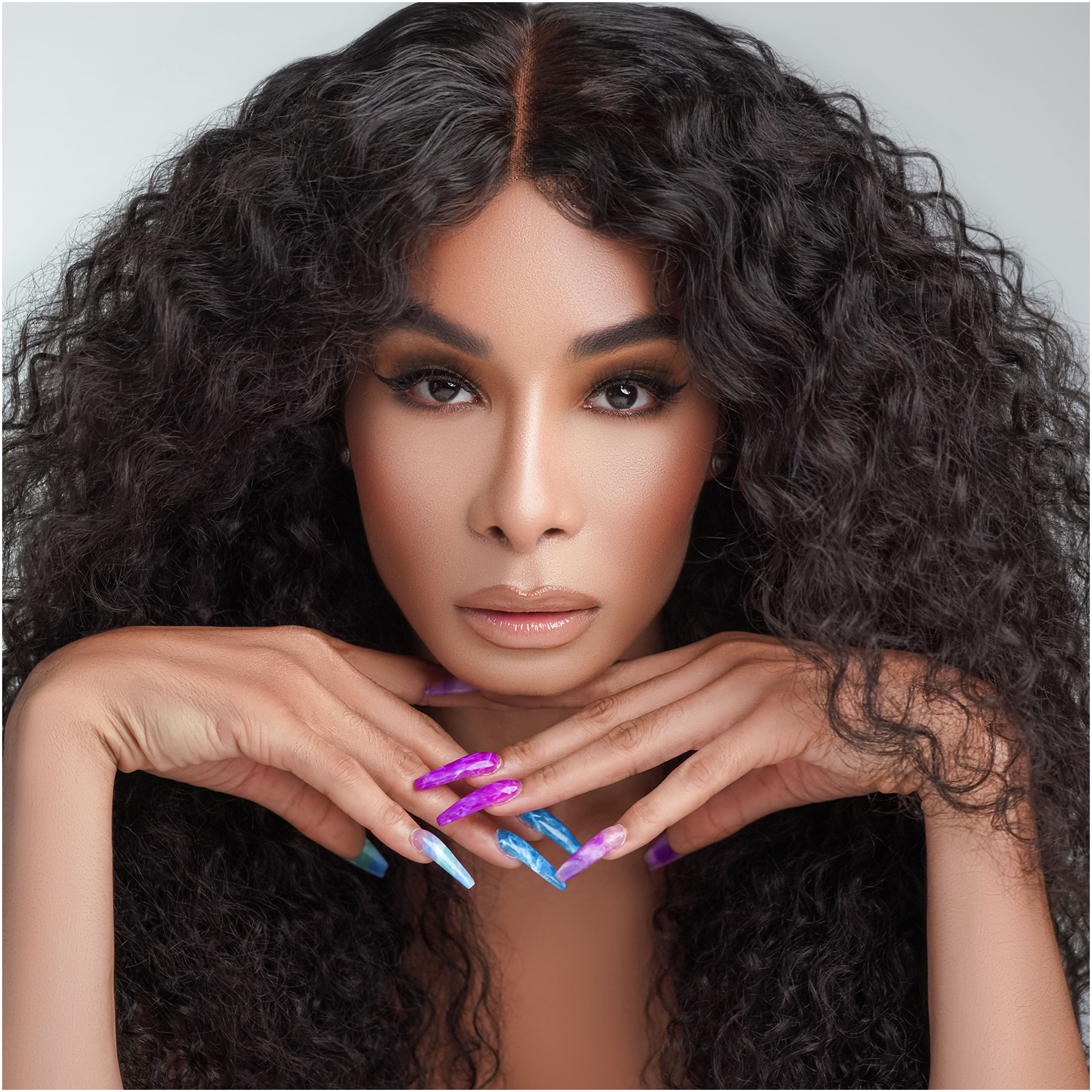 The year’s Emery Awards Ball Honoree, Leiomy Maldonado, “Wonder Woman of Vogue”, is a NYC born and bred Latina who was a former HMI youth member and today, is a sensational and iconic world-renowned vogue dancer, choreographer, model, actress and activist. We’re thrilled to recognize Leiomy for her outstanding leadership in the community and her exemplary model of empowerment, love and celebration of identity that she sets for others.

Leiomy was introduced to voguing in 2003 through the ballroom scene and later became a master of her craft, bringing a new style of voguing to the ballroom culture including the “360 dip” along with other art forms of dance. After being discovered on Season 4 of America’s Best Dance Crew in 2009, she began appearing in music videos including Willow Smith’s “Whip My Hair” and Icona Pop’s “All Night,” and has worked alongside other artists including Rihanna, FKA Twigs, Zhu.

Leiomy’s moves have inspired choreographers and celebrities including Beyoncé, Britney Spearsand Janet Jackson, and she was featured as an athlete in Nike’s 2017 BETRUE Campaign in 2017. Leiomy has worked as a choreographer and actress on FX Network Series, Pose and is a judge on the HBOMax show, Legendary. 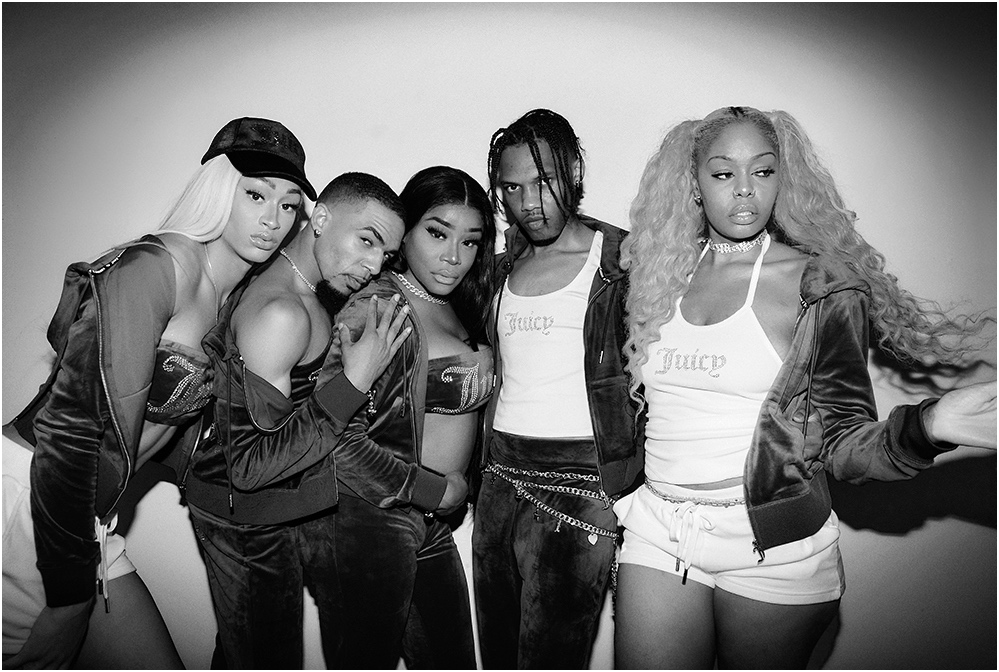 Founded in 2009 by Courtney Washington in her mother’s living room, the Iconic International House of Juicy Couture is one of the most distinguished and awarded houses in the NYC Kiki scene. However, it wasn’t an overnight success. Built on family, passion, and love the Iconic House has grown to become one of the most active and game changing houses in the ballroom scene.

From a living room in Brooklyn to being the first $1,000 house, Juicy Couture is the definition of impact. From TV appearances to tours, the House and its members have been seen on VICE TV’s My House, FX’s Pose, Hulu’s Kiki, and recently HBOMax’s Legendary, where they won Season 3 beat out nine other mainstream houses, bringing home over $100,000.

The House of Juicy Couture has won the “HMI House of The Year” five times within the past 13 years—three of the five years consecutive—and the first and only house to win “House of the Year” three times at the People’s Choice Awards. The House is also the first and only Kiki house to win “Kiki House of the Year” back-to-back at the NYC Ballroom Awards, where only one award is given to a Kiki house.

The house was recently on the “Sibling Rivalry Tour” with Bob the Drag Queen and Monet x Change, traveling to perform across multiple states. Other performances include Queens Pride, Nordstrom Pride, and Orlando Pride.

Watch a Compilation of the Season 3 Legendary Winners 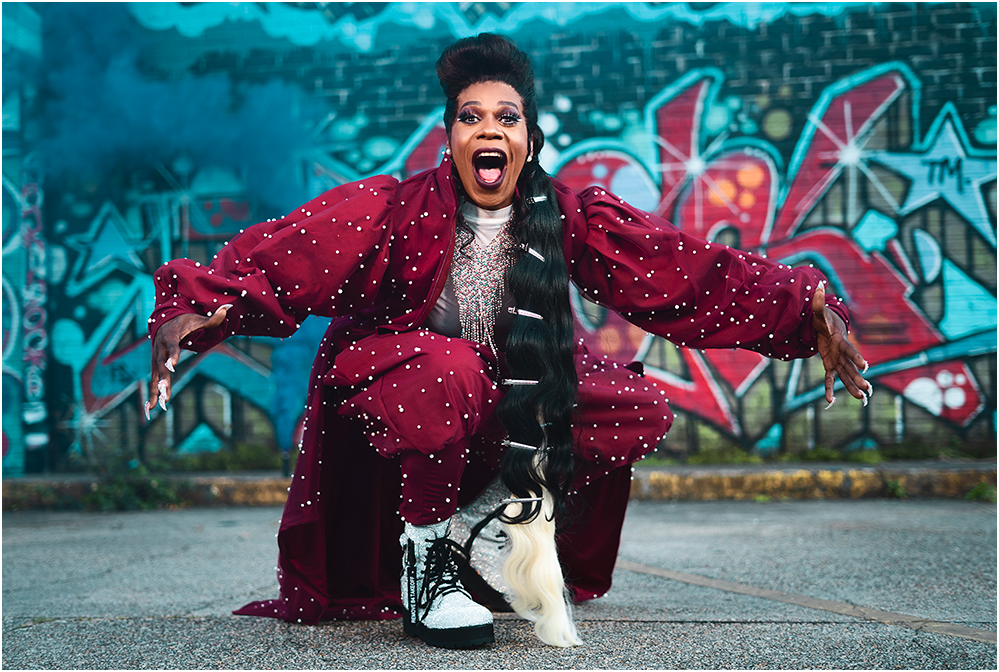 Known as the larger-than-life ambassador of New Orleans Bounce music, Big Freedia is a nationally recognized hip-hop artist, TV personality and cultural influencer. Most recently she made headline news for her feature on Beyoncé’s long-awaited lead single “Break My Soul,” released on June 21.

Premiering Monday June 27, 2022, Big Freedia appears as a cast member –alongside others like NeNe Leakes, Lamar Odom, Ray J– on BET’s reboot of College Hill: Celebrity Edition. The eight-episode series follows the stars as they return to school and focus on their higher education.

In addition to releasing her own critically acclaimed EPs, ‘3rd Ward Bounce’ (2018), ‘Louder’ (2020), and ‘Big Diva Energy’ (2021), Big Freedia, also known as the Queen of New Orleans Bounce, also appeared on numerous high profile projects, including Beyoncé’s Grammy award-winning, “Formation,” and on Drake’s “Nice For What,” where she brings her distinctive voice and signature catchphrases to all her work. Last year, she covered “Judas” on Lady Gaga’s Born this Way The Tenth Anniversary album (2021).

Big Freedia is known for her infectious energy and personality. In 2019, she was the official host for the Met Gala IG Live Stream Red Carpet event and a host of 2021’s Dick Clark’s Rockin’ New Year’s Eve TV celebration. Known by her fans as the “Queen Diva,” Big Freedia is a loud and proud advocate for racial and gender equality and LGBTQ+ rights.

In 2021, Big Freedia was honored as one of Ebony’s Power 100 and she has appeared on Access Hollywood, Entertainment Tonight, NPR, The Breakfast Club, The Problem with Jon Stewart, The Late Show with Stephen Colbert, Jimmy Kimmel Live!, and The Real. Big Freedia’s ascension in the music industry was chronicled over six seasons in the highly rated reality show, Big Freedia Bounces Back from 2011-2016 on Fuse TV. Her critically acclaimed 2015 memoir, God Save the Queen Diva (Gallery Books/Simon & Schuster) was released in paperback in 2020.

Ts Madison is arguably one of the biggest names on social media and as an influencer!

The icon Ts Madison adds reality star to her credit with The Ts Madison Experience airing on WE tv. She can also be seen hosting her own show on Fox Soul TV entitled, “Turnt Out with TS Madison.  The new hit show discusses pop culture news, the black church, transgender equality, plus-size women fashion tips, her risqué dms and cinema’s hottest releases.

Coined as “The Electric TS Madison,” by popular talk show host, Tamron Hall, as a social influencer rock star, to date, TS Madison has netted millions of followers and increasing daily on Instagram, Twitter, YouTube and other multiple media platforms.

She is the author of A Light through the Shade: An Autobiography of a Queen, a television host, producer, artist, motivational speaker, media personality, for which she hosts her popular online unfiltered gossip talk show, “The Queens Supreme Court” that garners millions of viewers each week.

Madison has built her social media influencer name by walking in her unapologetic truth, as an openly transgender.

Her ability to interact with her followers (or as she likes to say, “the Maddie Mob,’) on a more personal level by regularly posting photos of her life and experiences, has made her adored, even more.

As an activist tackling stigma through storytelling, Madison uses her celebrity status to advocate for both the trans community and LGBTQ rights.

“I’m seeing changes in the community, and people now realize they’re not alone.  Now no one can ever say we, the LGBTQ community don’t exist, but we still have more work to do with educating our communities about gender and identity,” says Madison.

In 2019, Ts Madison was honored in the Out magazine as one of the top 100 influential LGBT people.  “I was so humbled,” Madison stated after she heard the news.

You can also catch Madison on RuPaul’s Drag Race Untucked!

Her popular show The Queens Supreme Court on her channel garners millions of viewers which is also home to a morning show, a talent show, and a late-night show, all of them hosted by Madison herself.

A native of Miami, Florida, Madison’s story of growing up trans and sharing about her life on social media platforms has reshaped the way that the pubic conceptualizes transgender and gender-nonconforming identities and experiences.

Tune into all things Ts Madison 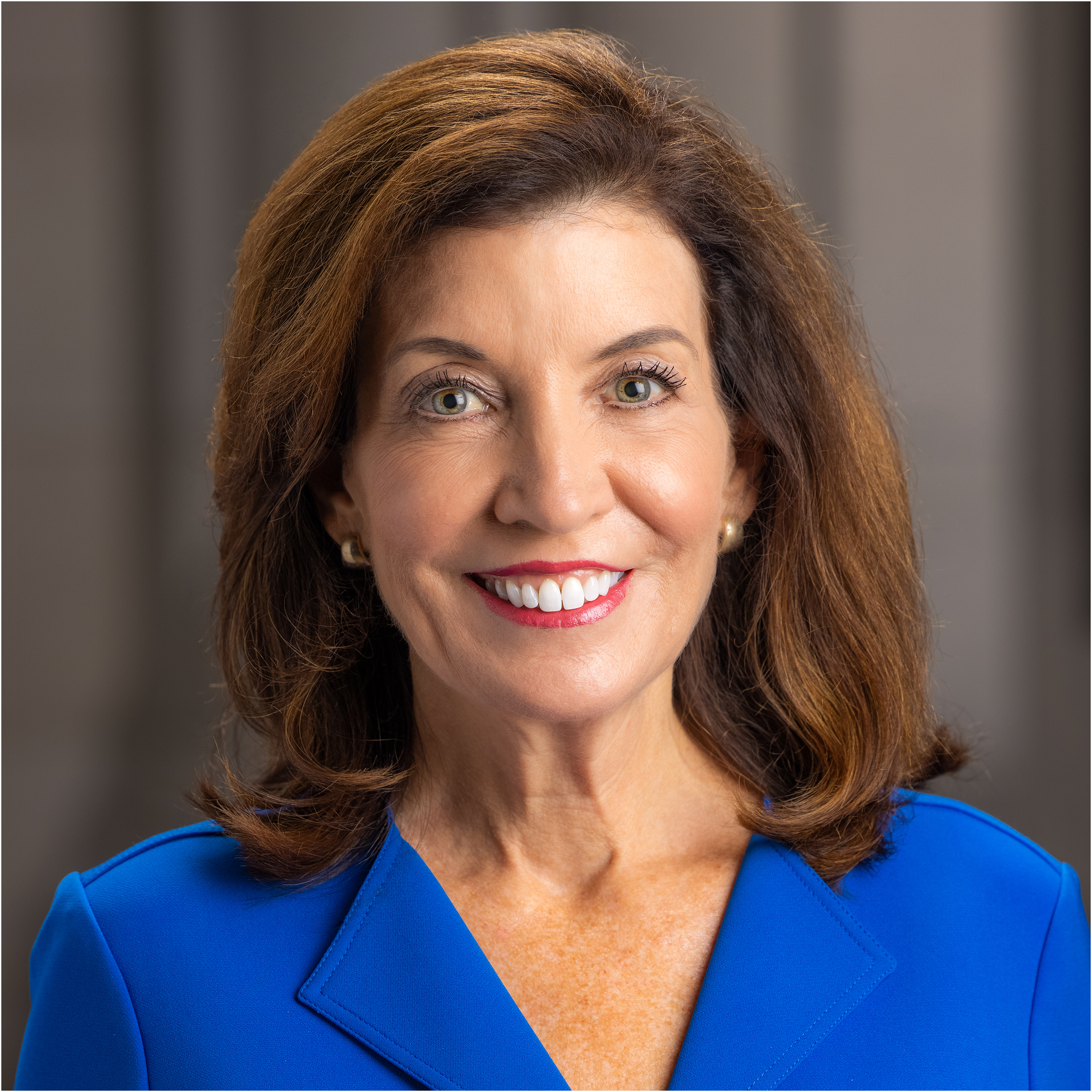 Kathy Hochul is the 57th and first female Governor of New York State. Governor Kathy Hochul began her career in public service on her local Town Board before serving as Erie County Clerk, and then as a member of Congress for New York’s 26th Congressional District. She more recently served in statewide office as Lieutenant Governor and now as the first female Governor of the State of New York. 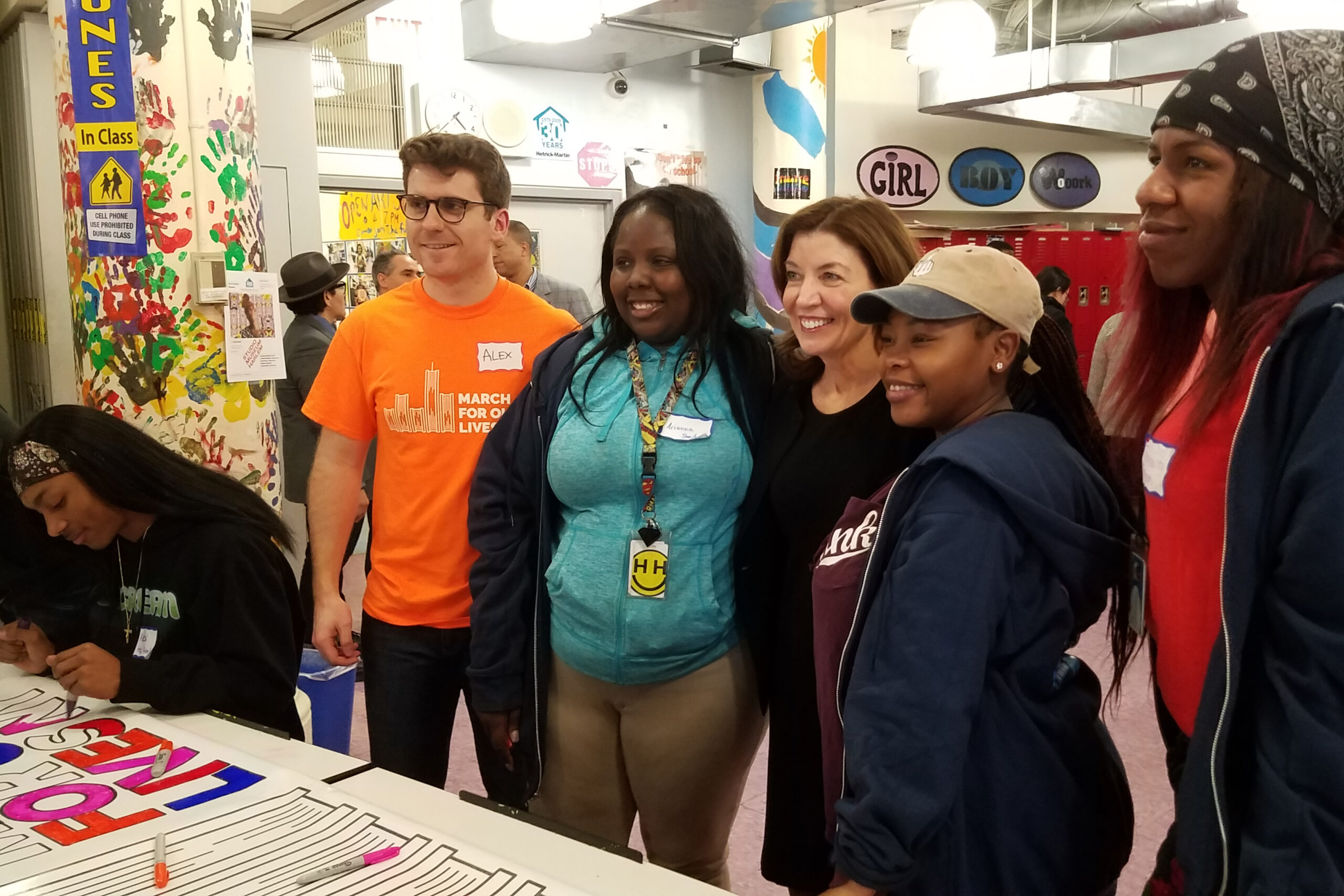 Governor Hochul has been a longtime supporter of Hetrick-Martin Institute (HMI) and an advocate for the LGBTQIA+ community, particularly our young people. Her interactions with our youth during visits to our campus in the past have given them a sense of hope and reassurance, knowing that elected officials do care about their well-being. We’re grateful to Governor Hochul for her commitment to HMI and her time she has shared with our LGBTQIA+ youth. 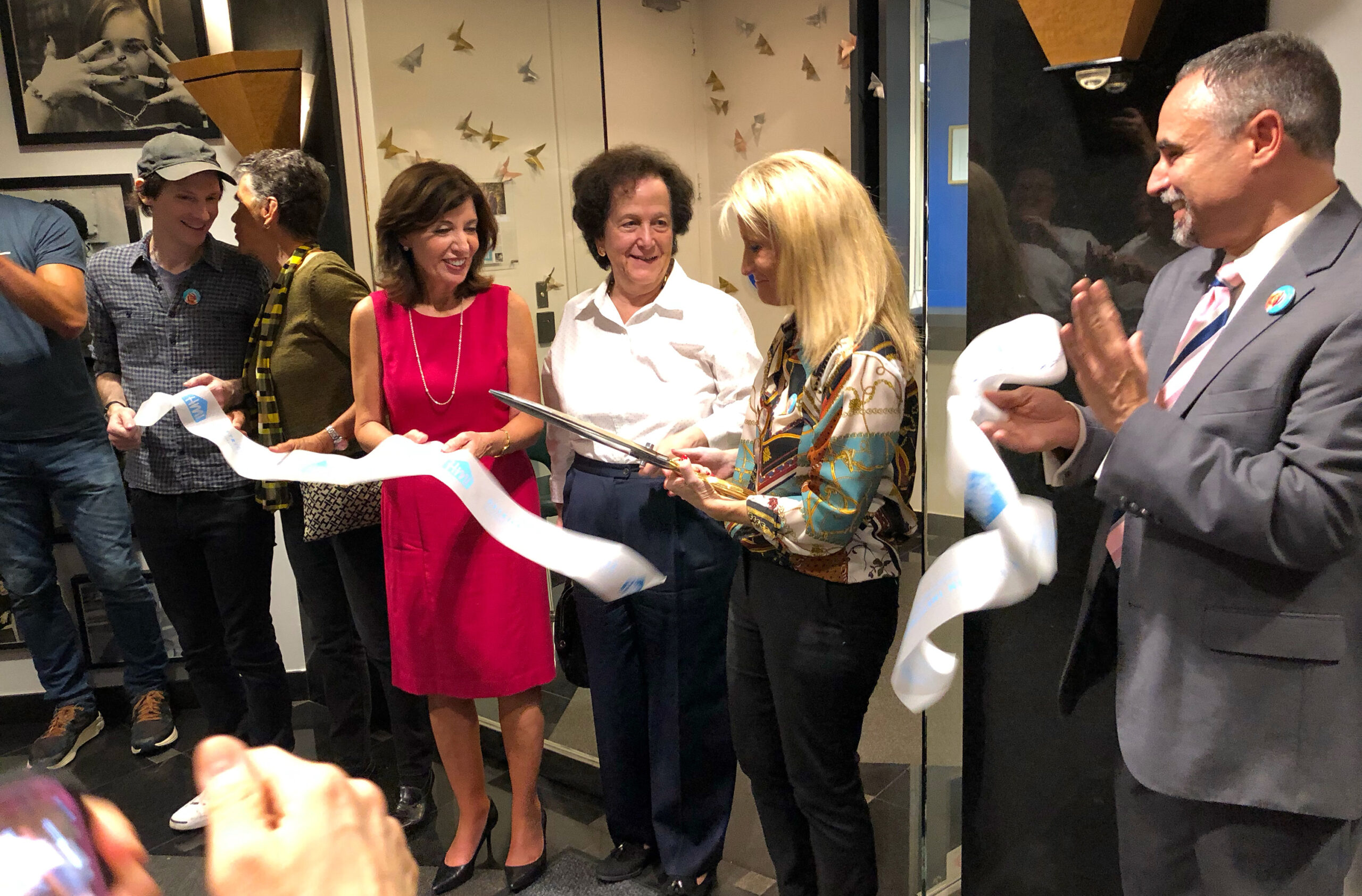 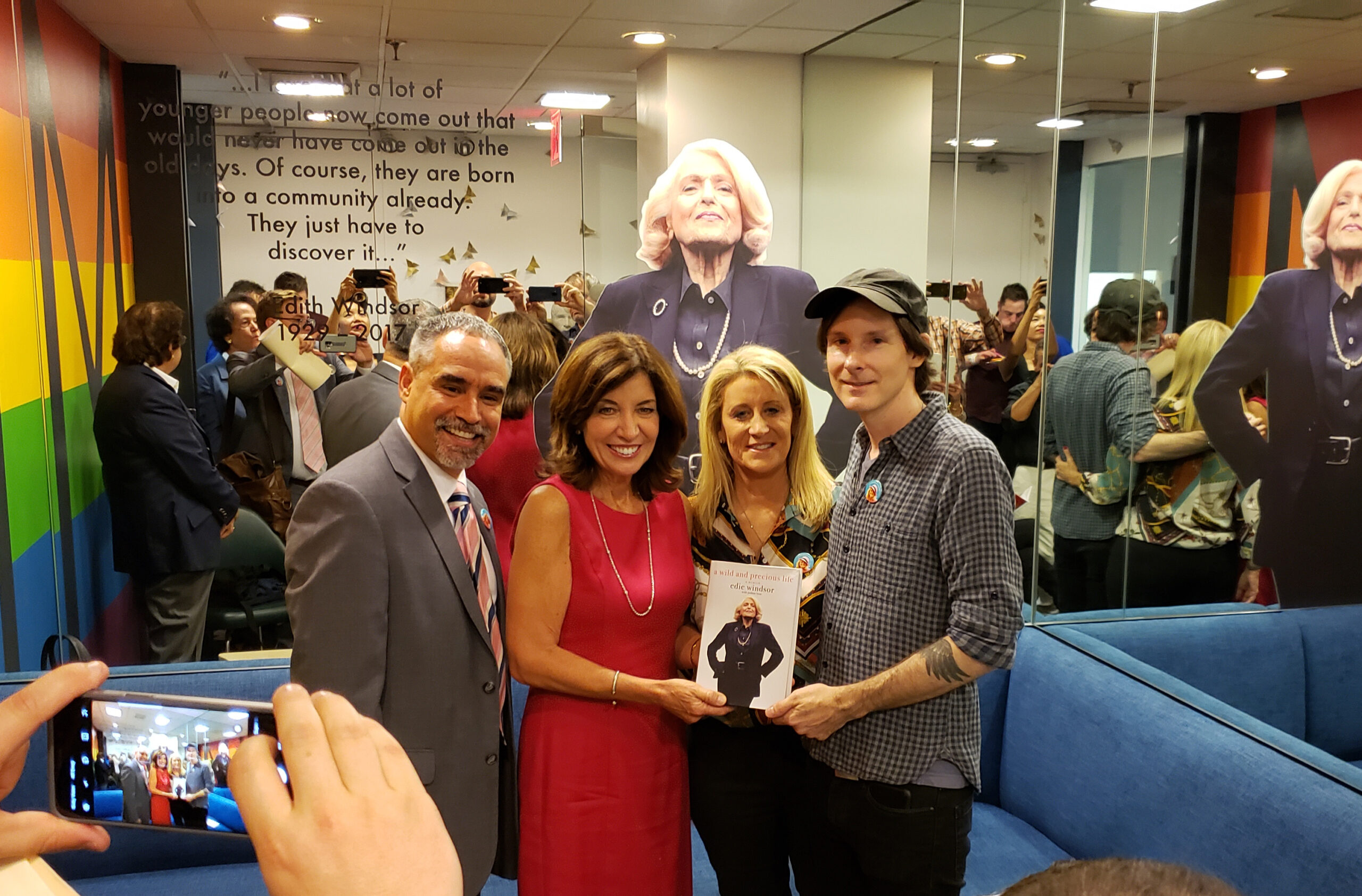